It has been way to long ago since I tested my capability of hacking things.

Since i am an energy engineer, I have been looking for a cheap and easy way of monitoring my power consumption.
I know there are other hackers out there that have already worked on this problem, and I have seen dozens of hacks on smart and dumb house-power meters, but only a few that covers power plug energy meters.

You have the Tweetawatt - awesome, but not my cup of tee (i prefer to write my own software for AVR or Arduino) and still ~55$ each...
And a guy named Connor Wolf has an awesome project where he builds his own and a video where he tares a few standard power plug meters apart.

I have seen how cheap the China-version of the energy meter is (£7,86), and when i saw the tare-apart video where he takes one apart, I went ahead and ordered two pieces of the EU-type (230V 3,6kW). Of course my intention was to convert them to my own cheaper version of the Tweetawatt. 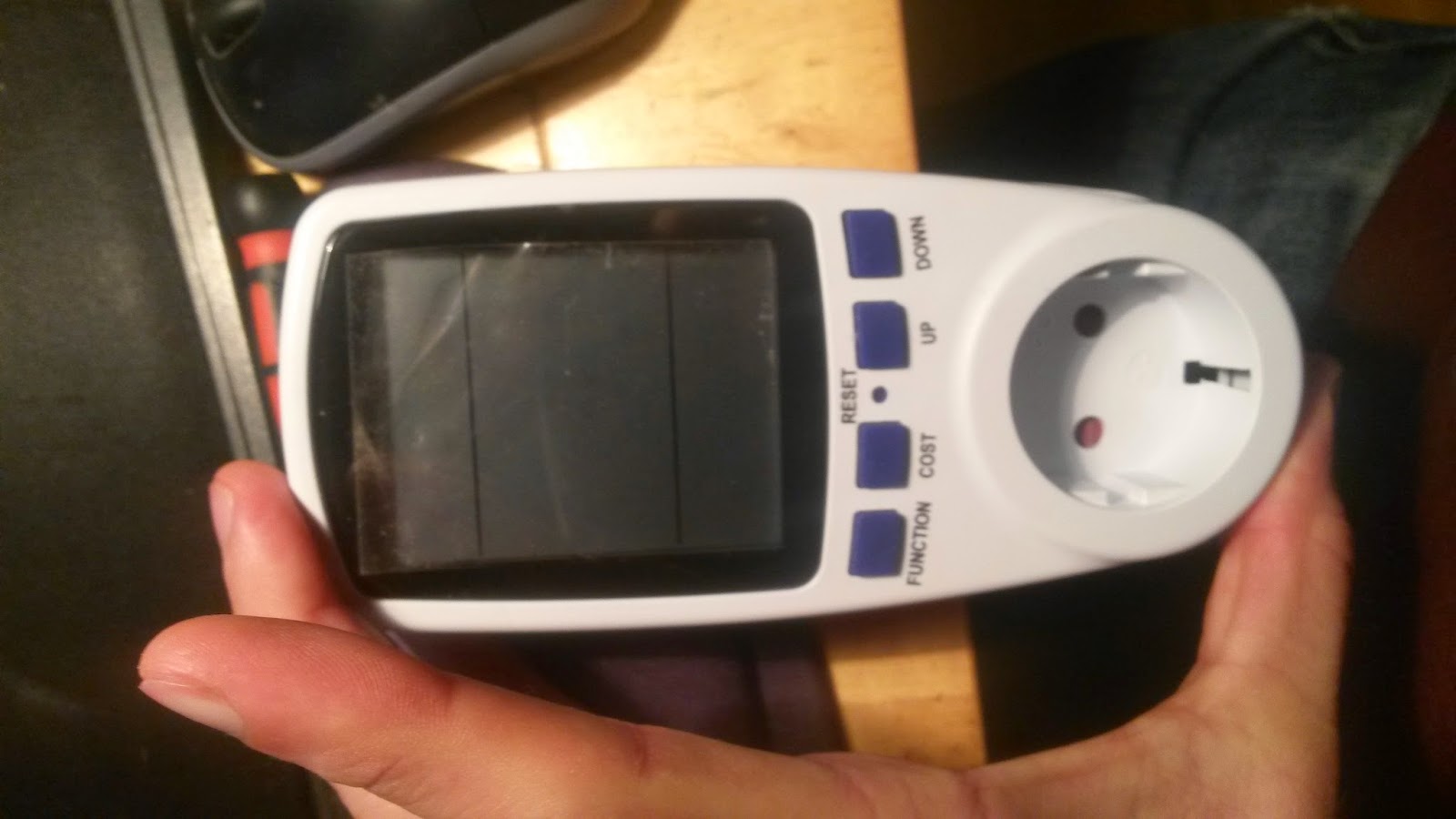 My final goal is to connect them to the internet either via an nRF24L01+  and my rPi-setup, or with an ESP8266 Wifi adapter (if it will ever arrive in the mail box...)

The future goal is to use an home made Android app to graph the data, i'm not quite there jet, but this tutorial describes how I hacked the power meter and successfully got the voltage, current and power readings to an arduino using interrupts on the CLK.

The meters showed up last week, and the first thing i did was to open the cover of one of them. 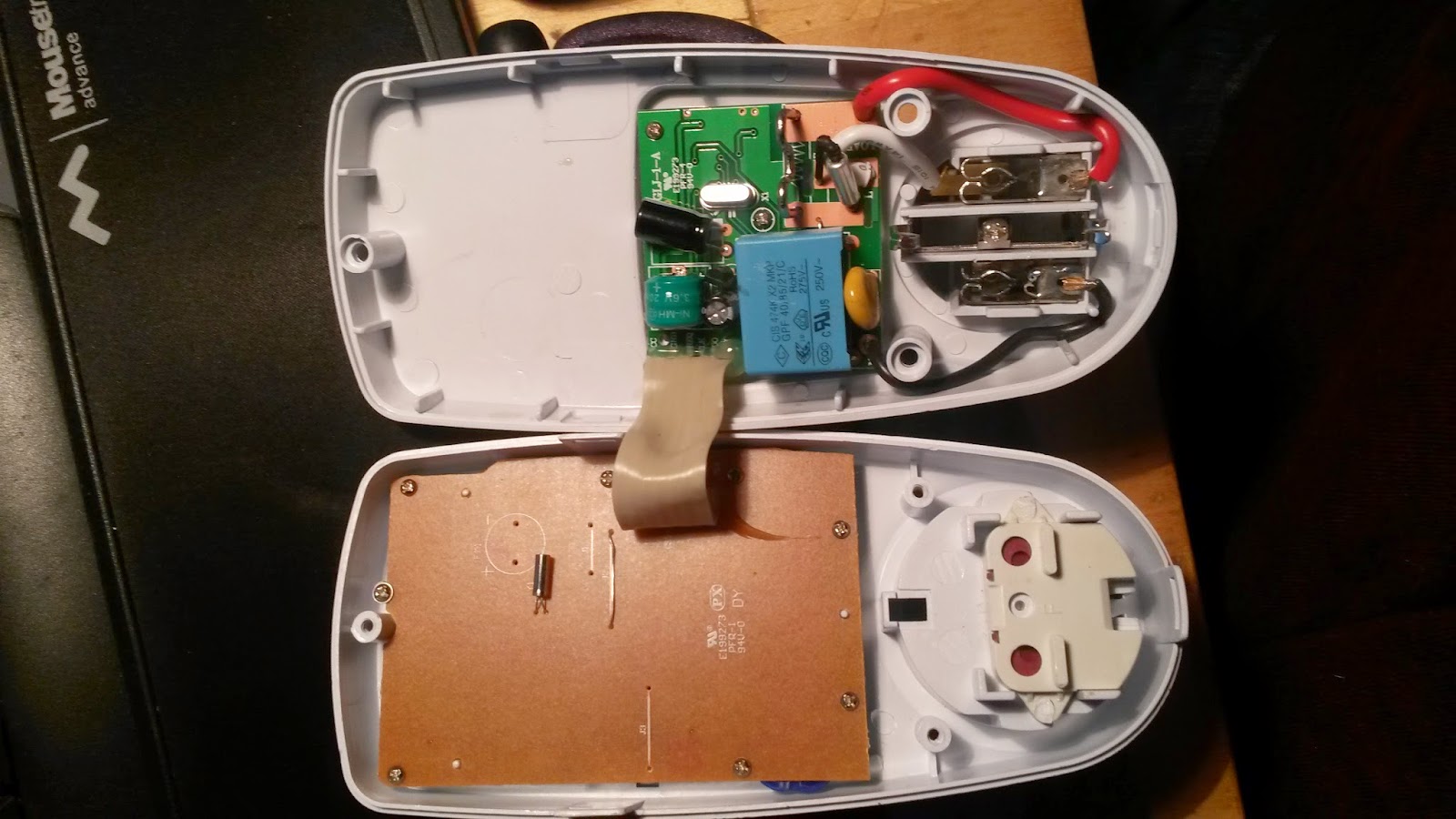 The guts looked promising since it is very similar to the one in Connor Wolfs video with the 3,6 V battery and the ribbon cable between the two circuit boards. The differences i can see compared to the 110 V version is the big blue capacitor.

The reason I started this project from the first place was because I had seen the ribbon cable labels in the video, so I was very satisfied when I confirmed that the 230 V version also came with the labeled ribbon cable between the power meter and the main processor which sits under the brown circuit board. 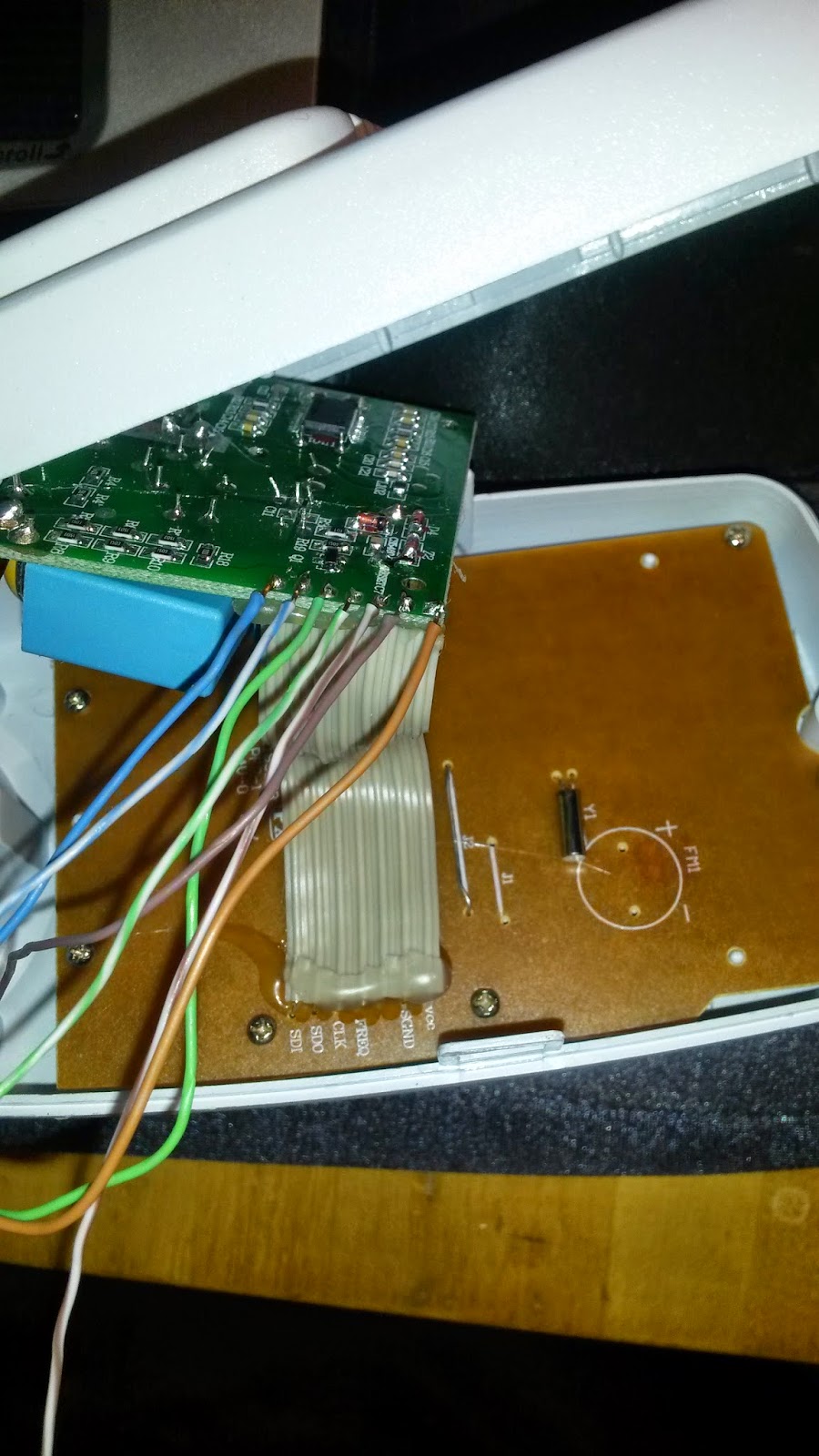 I tapped into all of the 7 wires, (7?) yes there are 7 wires, only 6 labeled. closed the case, and plugged it into the wall.

Before i hooked it up to my awesome £6, 8-channel, 24 MHz logic analyzer and started testing it in the logic analysing software, I firs checked all the cables with a multimeter to see that none of them was connected to mains (this video shows that the Kill-a-Watt meter has 110 V on the ribbon cable strangely enough). But the China version was safe on all 7 wires and the five which weren't VCC or GND  got its own channel on the logic analyzer:

###WARNING!!! I'm not an expert in HVAC and there are lots of knowing people that read this article on Hackaday.com and informed me that hooking up the logical analyser like this is an terrible idea! It seems like the energy meters DC-line is not grounded, but instead use Neutral as ground, which can be very different from your computers USB-ground... DO NOT USE MY SETUP, It can be both dangerous and harmful to the computer!

If you want to test the SPI on a non-grounded device they have a lot of suggestions on how this should be done, optical isolation sounds pretty smart (maybe there are even optically isolated USB-hubs you could use?!) I guess I was lucky not to blow up my computer, or my self... 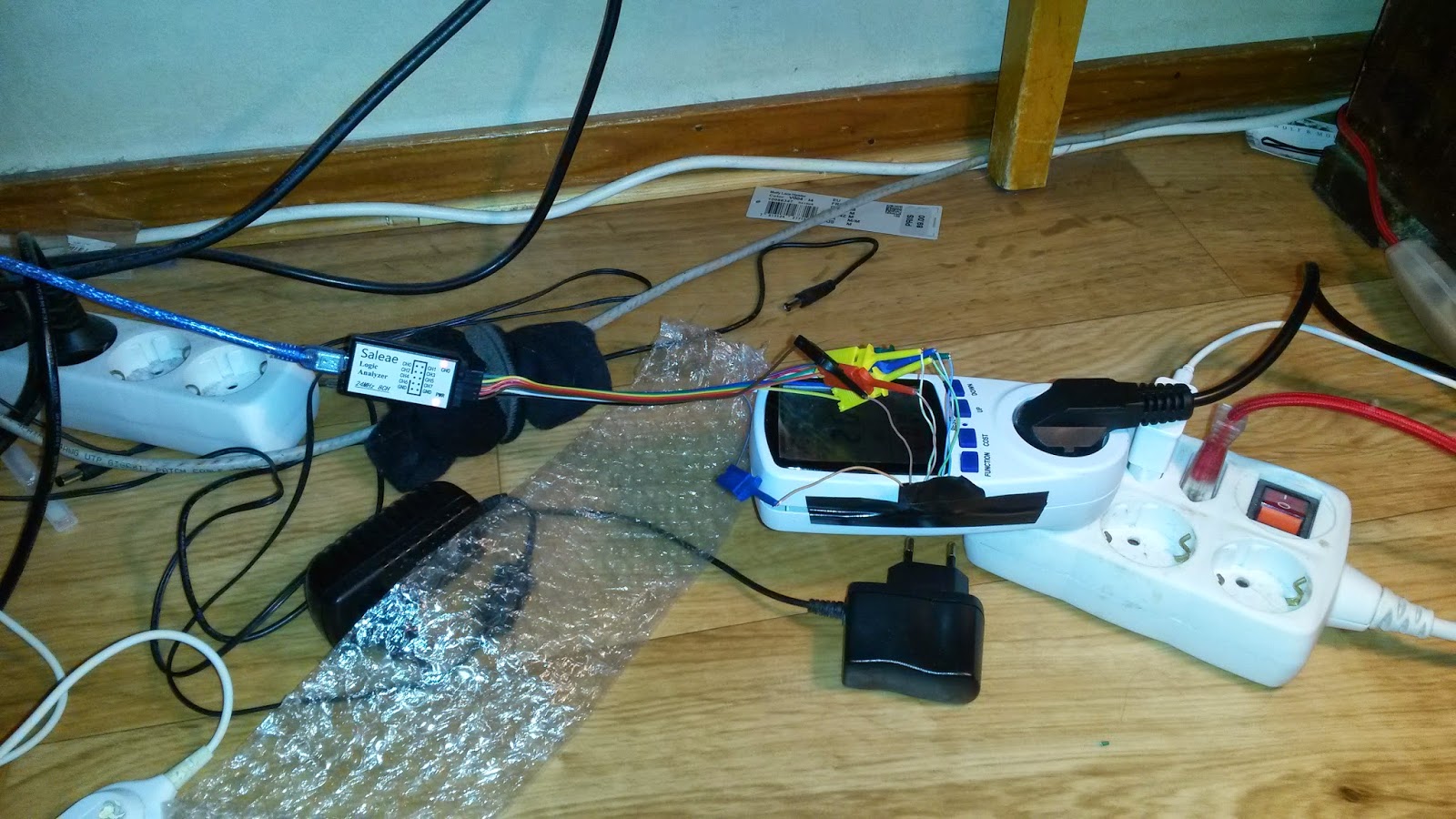 I must admit that this was the first time I have ever attempted to sniff a data communication before, so I had to do a little research. I recognized the CLK as the clock wire in SPI, and guessed that the SDO and SDI was the same as MISO and MOSI but where was the SS (chip select) wire?

My hope was that maybe SPI can work without chip select when there is only one slave that listens, but that would make it heard to know when a transmission starts and end!? how does it sync?

Well, it turns out that I was right, This is the output on a run with nothing connected but the meter:

Yey, This confirmed my theory and it showed that the FREQ-pin was giving a 50 Hz signal, not at all involved in the SPI communication (nope it's not the SS-line). and that the un-labeled cable was the same as the VCC-labeled pin (high = 3,6V)

This project has improved my analyzing skills allot, and I had to learn how to set up the analyzer to debug the SPI-signal (great SPI-info)

To read this scatter as SPI you need to define the start (where to read the first bit in a byte from)
1. press T1 or hit 1 on keyboard
2. put marker in between SPI-signals (where it's obviously not in the middle of sending a byte)
3-4. Add an Analyzer, choose SPI

Next step is setting up the SPI-analyzer:
1. Press settings
2. zoom in on the first byte, and try and figure out what settings that is used. (see pic under this as well) 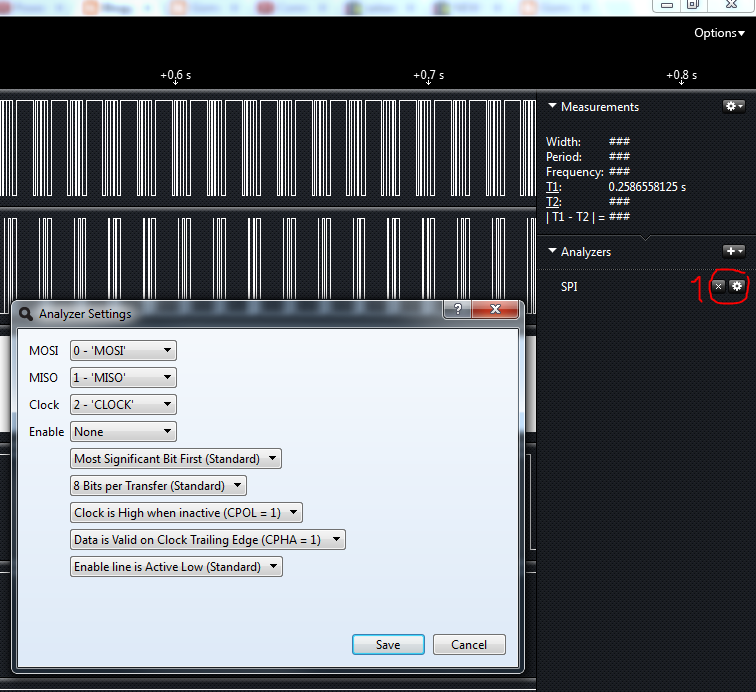 Start by "Re-run starting at marker T1" as in picture bellow.
I found that my data is read when CLK is rising "Trailing Edge" and comes in sets of 8 bits (1 byte).
Note the last MOSI-byte going low, only catched by the trailing edge of clk=>trailing edge
This is how the bits in a byte are interpreted on trailing edge:

At this time, there was one happy geek in the house!

Now I had figured out how to sniff the data communication, I still had no idea of what, and in what format the data was sent.

I figured that my best chance of decoding the data would be to sample lots of data and then compare it. So i started sniffing the setup when connecting my soldering station which was perfect since it has the ability to choose different power settings, and for heavy load i used a 1,8 kW water heater.

When comparing the data, it was quite clear that there is not much going on here.The data is sent in chunks of 70 packages at a time, followed by a 47 ms delay. Each package contains 8 bytes, and luckily for me, the first 68 package seems to be the same every time, independent of the wattage reading and they all look like this:

But then in the 68th package it always sends:

Which i think prepares the Master that next 8-byte package will contain important stuff.
This is what comes out in package 69 with different loads:

I guess Byte8 represents a very small fractions of voltage level, so i skip that one.

And the last 8-byte package hopefully gives me some sort of current measurement value so that I can calculate the power!?
Package 70 looks like this with different power loads:


Where I have tried hard to find out what bit 2 to 4 means, please help me with that in the comment field!!!! The meter displays power factor, could it be something with that?

And I am one very happy engineer!

A bonus is that changing the setting to view voltage or current, doesn't change the SPI-data.

I can't have a PC next to every power plug energy meter i have hacked so next step was to program a micro controller to do the SPI-sniffing for me.

I have been using AVR's for quite some time now, but this is my first Arduino project, and for testing purposes I'll be using an Arduino Nano, but I have decided to use an 3,3 V Arduino Mini when it's time to solder everything togeather since I have a 3,3 V battery in the meter, and I am planing on transmitting the read data with either an nRF24L01+ to my rPi-setup, or the ESP8266 Wifi adapter (if it will ever arrive...). I wonder if I need a big fat cap to supply the current when sending data like the Tweetawatt!?

Anyways, my plan is to send the data to Gdrive so that i can reach it from an android app or something, but that's future work! If you read this, and now how to log data from ESP8226 to G-drive or Dropbox, I'd appreciate if you gave me some tips!

I first thought of using the built in SPI-function, but learning how to use the "bitbanging" technic on SPI sounded allot more fun! (and I'm not sure the built in SPI would work anyway without SS)

This is the psudo chode I wrote:
1. Connect GND, CLK (green cable) and SO (blue-white) to Arduino (CLKto INT0 and SO to D5) (Arduino 5V from USB for now)
2. Setup interrupt (ISR) on INT0-pin (D2) and make it trigger on rising edge (se ISR-info)
3. When trigger occures: loop as long as CLK is high while logging the time
4. When CLK goes low: check if the delay was between 1-2ms, if so then we are in clk-sync and next clk-rise will be the start of a new byte (this is the delay in between every one of the 70 packages in a transmission)
5. Let CLK-interrupt trigger 40 times to skip the first 5 bytes of the current package
6. Save status on pin 5 (MISO) every time CLK-interrupt triggers to two integers (the next 8*2 times, which will be Byte6 and 7) by using shifting bits method "<<"
7. Let clk trigger 8 more times to finish a complete package and stay in sync
8. check if Byte7!=3, If true: its the 69th package => use byte 6 and 7 to calculate U and proceed with the next step, otherwise (Byte7==3) then: set sync=false and go back to step 3 and wait/look for next package.
9. Let CLK-interrupt trigger 40 more times to skip the first 5 bytes of the 70th package
10. Save byte 6, 7 and 8 in integers by shifting bits each time a new bit is read (8*3 times).
11. Calculate P and then I=P/U
12. Send U,I,P to computer for debug.


And believe it or not, after a good couple of hours of debugging it now works like a charm! 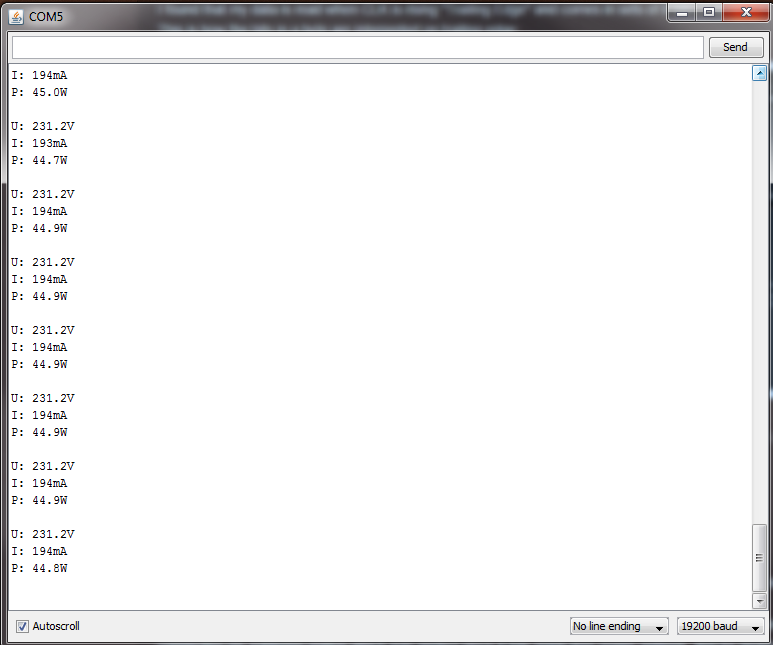 Here is the code that now sends the data to the Arduino-IDE, but is easily changed to an nRF24L01+ and hopefully the ESP8266  as well...

I now have a working setup where the energy meter is completely wireless with an Arduino mini pro 3,3V and a nRF24L01+ module! =)
Se next post for further information.
/Kalle
Posted by Karl Hagström at 11:59 PM