This post is a description/tutorial on how I managed to hack the stereo (HU-650) in my Volvo V70 (2007) and successfully added my own AUX input. This hack should work with any HU-xxxx unit, "HU" meaning Head Unit (the stereo) 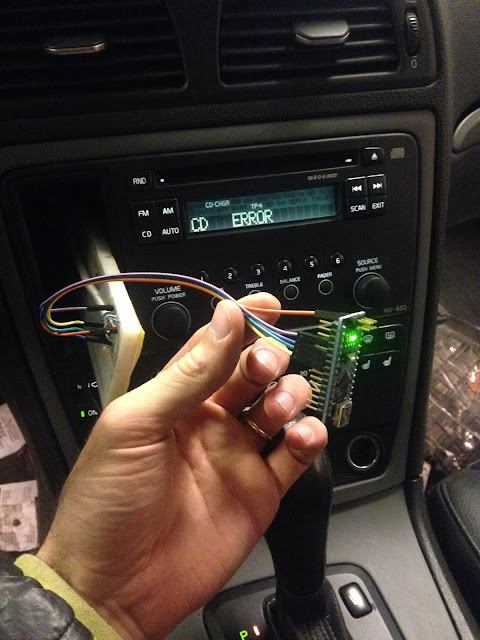 Why, why, why isn't there an AUX input on my car stereo from 2007?
Yes 2007 was before the big era of smartphones, but everyone owned a couple of dirt cheap mp3 players and  iPod was a big thing.

The HU that my car is fitted with has two super retro 8-pin DIN-connections on the back. One of which is for connecting a CD-changer "CD-CHGR" that you could have installed in the boot of the car - but who uses CDs these days?

It didn't take allot of research to find out there is already a product out there that lets you add an AUX to you HU-xxxx. The only drawback is that it sets you back $80 and most of all: It doesn't come with the awesome feeling that you get when you have hacked the stereo yourself.

It wasn't an easy thing finding information on how to hack the HU, but after allot of research I finally found some really good pages that made the hack easy peasy.

This is how it works:

Hacking together some code

Edit 2016-11-04
A guy named Sebastian has modified my code and his version is more stable, and it also works on Mitsubishi HU and supports displaying track numbers! -Here's a link to his code!

Finally some programming!
I found this awesome write-up that contained almost everything I needed to fool the HU that the Arduino is a CD-CHGR. I will talk you through the process:
That's it for fooling the HU that the CD-CHGR is connected, now it's just a matter of connecting a device to the Left and Right Audio pins plus Ground. I soldered a network cable plus an 3.5 mm Audio cable to the pins of a DIN-plug. 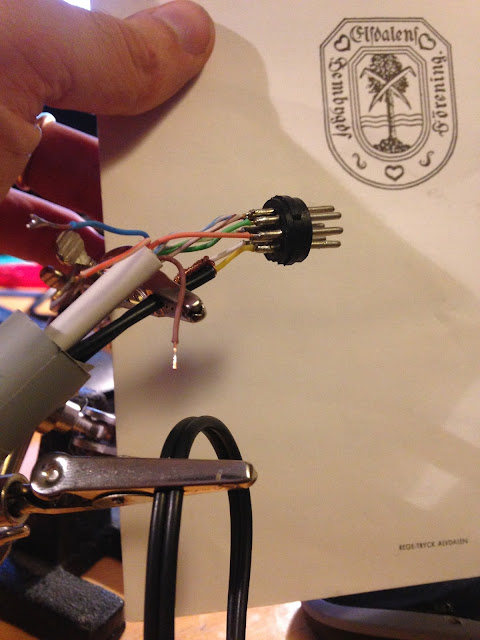 Take care when reading the schematics above, it is the left socket on the picture you are interested in, that's the socket on the back of the HU-unit (female) and will be equal to the back of the DIN-plug.  (as you can see, I put the red cable on the "RUN" to use the 12V to power the arduino, White and yellow are Audio Left and Right)
As a bonus the 12V is only active when the ignition is turned on => no extra load on battery caused by the arduino when car is not used) 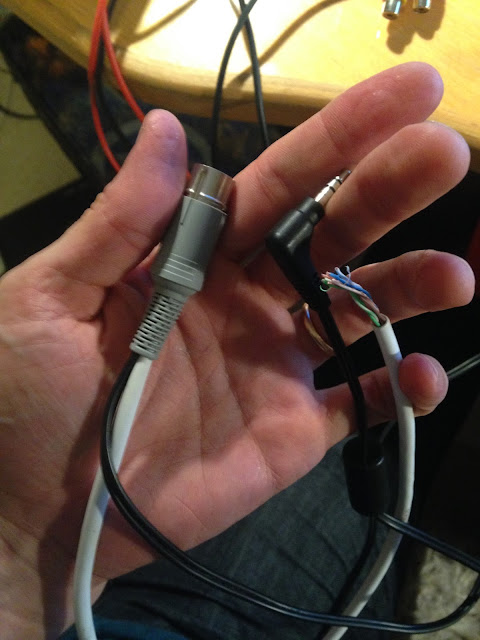 The code I wrote (below) is well documented and fairly easy to understand...

I had a hard time getting the function "SendByteToMelbus(uint8_t byteToSend)" to work.
It turned out that the Arduino functions: digitalWrite(MELBUS_DATA, HIGH); and LOW are too slow for this code, (MELBUS runs at 10-12MHz) and CLK had returned to high state before Databit was changed.

I tried this setup without any form of ground-loop isolation and it works like a charm! Even when the engine is running and my smartphone is charging through the cigaret-socket the sound is crisp and no disturbing noise (alternator suppose to cause ground noise)

I guess one could buy an external Ground Loop Isolator ($5) to be on the safe side....

Posted by Karl Hagström at 8:15 AM